Groundwater is the water which established in the geological formations (Fractures, Fissures, Pore Spaces) in the underground. Those groundwater bearing formations are called as Aquifers in Geology. However, groundwater copies the surface topography; Mostly groundwater flows from high pressure to low pressure (pressure gradients) fracture paths. Generally, groundwater of the world is derived from three sources, such as, Meteoric water, Connate water and Magmatic water.

Meteoric water originates as a result of rainfall, snowfall, ice, and the main source of groundwater. The meteoric water is an important part of the hydrological cycle. After meteoric water reaches to the Earth surface, infiltrates into the ground through fissures, pores and joints of rocks and stored in the subsurface (at the level of nonpermeable rocks) as groundwater.  The water stored in the underground comes out of the surface as “springs” (naturally) or “wells” (artificially). 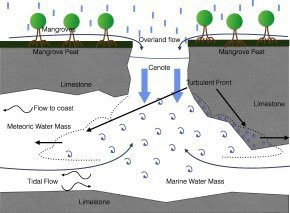 Connate water is water which is trapped in pore spaces and cavities of the sedimentary rocks at the time of the deposition of the material of seas and lakes and it is also called as “sedimentary water”. Sedimentary water can be either fresh water or ocean water and occurs at great depths in the lower layers of the zone of saturation. It is not undergoing the present-day hydrological cycle, but the one operated at the time of deposition. Therefore, this source is called “Fossil water”. 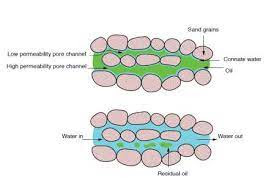 Magmatic water may have come from the Earth interior with known previous extensions in the near surface environment. This water is derived from igneous processes. As hot magma enters due to volcanic action, its vapor drops are condensed and converted into water. Springs, wells, geysers are examples for the source of magmatic water. Magmatic water has not been a part of the hydrological cycle and at any time of the geologic history. 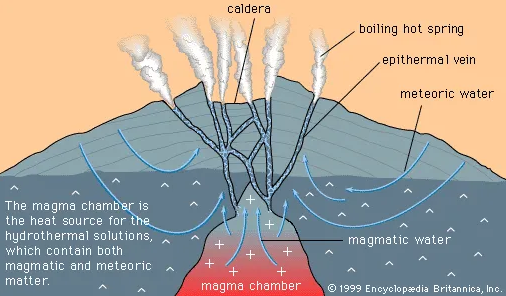