ABSTRACT
Background: Dyslipidemia and impaired glucose tolerance are common complications of chronic kidney disease (CKD) and are responsible for increased cardiovascular risk. Studies on lipid profile and glycemic status in CKD of unknown origin (CKDu) are scarce. The objective of this study was to evaluate the lipid profile and glycemic status of the patients with CKDu and to aid in preventing morbidity and mortality.

Methods: The descriptive, cross sectional study was conducted in a rural CKDu endemic area, Girandurukotte. Data was collected from February 2018 to June 2019. For the diagnosis of CKDu, history and clinical features with supportive biochemical, renal biopsy and radiological evidence were taken as criteria. Blood samples were taken for serum creatinine, lipid profile and HbA1C. Already diagnosed patients with diabetes mellitus and dyslipidemia were excluded.

Conclusions: The high prevalence of dyslipidemia, pre-diabetes and diabetes mellitus in patients with CKDu may accelerate the progression of chronic kidney disease and increase the risk of cardiovascular disease. Early detection, initiation of appropriate medication and early referral to the expertise will ameliorate morbidity and mortality.

INTRODUCTION
Chronic kidney disease (CKD) claims thousands of lives every year throughout the world.1 According to WHO records, it was the seventh most common cause of death in Sri Lanka in 2012.2 Kidney Disease: Improving Global Outcomes (KDIGO) Work Group on Evaluation and Management of Chronic Kidney Disease defines CKD as, kidney damage or glomerular filtration rate (GFR) <60 ml/min/1.73 m2 for 3 months or more. It is classified into five stages based on glomerular filtration rate (GFR).3 Diabetes mellitus, hypertension, and glomerulonephritis are the leading causes for CKD.

However, since 1990 a new form of CKD which cannot be attributed to diabetes, hypertension or other known etiologies has been described predominantly in some low and middle income countries, including El Salvador, Nicaragua, Egypt, India and Sri Lanka.4 In Sri Lanka, CKDu was first discovered among young paddy cultivators in North Central province.5 Since then high prevalence of CKDu were reported from several other areas in dry zone of the country. Even though several studies have been conducted worldwide to identify the etiology, the name CKDu remains appropriate because the cause of this disease remains unknown. However, it has been revealed, CKDu is more common among young male farmers during the productive age.6,7 Although, the specific causative or critical factor of CKDu has yet to be identify, multiple insults due to adverse geo- environmental conditions, poor quality of water, agrochemicals, diet with possible contaminants, unhealthy nutritional practices, risk behaviors and genetics seems to be contributing for the disease occurrence.8

CKD and invariably the CKDu are linked with several complications due to lower levels of kidney functions for a long period.9 These complications contribute to high morbidity, mortality and poor quality of life.10 Among these complications, cardiovascular diseases (CVD) play a major role and it is reported by previous researchers that risk of mortality from CVD is 8.1-fold greater in a patient with End Stage renal diseases than in a reference population without kidney disease.11 Dyslipidemia and impaired glucose tolerance are among contributors of increased cardiovascular risk.

Early diagnosis and take relevant measures to minimize the complications related to dyslipidemia and glucose intolerance is very important to enhance the health status of the CKDu patients. However, the studies conducted on the lipid profile and glycemic status in CKDu in Sri Lanka are limited. Hence, the ultimate objective of this study is to aid the CKDu population to enhance their quality of life by evaluating the lipid profile and glucose status. The results of this study will be beneficial for the entire nephrology community to provide a quality care to the CKDu patients.

The study was conducted in a rural CKDu endemic area in Sri Lanka; Girandurukotte. Following a screening program, they underwent serial blood investigations, ultra sound imaging and renal histology evaluation for the diagnosis of CKDu.

Study population and study period
The patients who met with all the inclusion criteria were recruited into the study. There was no distinction between male and female patients. Data was collected from February 2018 to June 2019.

Inclusion criteria
All patients suffering from either stage 3 or 4 CKD (eGFR of 15-59 ml/min/1.73 m2 , according to MDRD formula); patients within the age range of 20-80 years; and all patients who gave informed written consent for enrolling into the study.

Study design
It was a descriptive, cross sectional study. Ethical clearance for the study was taken by the ethical committee of National Hospital, Kandy.

Diagnosis of CKD and CKDu
Diagnosis and staging of CKD was performed according to the kidney disease improving global outcome (KDIGO) 2012 clinical practice guideline for the evaluation and management of CKD. Diagnosis of CKDu was performed using the Case definition of Chronic Kidney Disease of Unknown Etiology (CKDu) Sri Lanka 2018 Update.12

Occupation
Majority of the patients in this study were from low socioeconomical status, among the participants 46.4% were doing agriculture or agriculture-related profession. Most women were unemployed (Table 2). 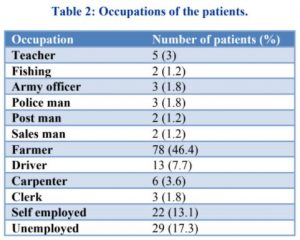 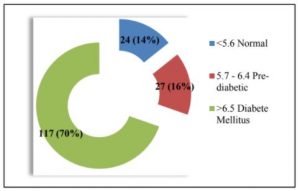 There was no statistically significant association between HbA1C levels and BMI (p=0.29) or HbA1C and lipid abnormalities (p=0.32).

DISCUSSION
The study consisted of 168 patients with the mean age of 50.3 years; among them a significant number of patients had abnormal lipid profile while the commonest was abnormally low HDL cholesterol followed by elevated serum triglyceride, total cholesterol and LDL cholesterol. The prevalence of dyslipidemia in CKDu patients without any prior history of diabetes as calculated in this study is found to be 55.9%. An evaluation carried out by National Health and Nutrition Examination Survey (NHANES) on 2001-2010 revealed that the prevalence of dyslipidemia increased from 45.5% in CKD stage 1 to 67.8% in CKD stage 4.13 In our study on CKDu patients, the dyslipidemia prevalence is in keeping with the global dyslipidemia prevalence. The abnormalities in lipid profile in our study are markedly different from the other studies (Table 4). The significant abnormality noted in the study population is the reduction of HDL cholesterol while in most of the other studies they found there is a significant increment of serum triglyceride levels. The studies done by Mshelia et al and Ganta et al revealed the commonest abnormal finding of the lipid profile is elevated triglyceride which is 68.3% and 48.43% in their respective studies.14,15 Both Ganta et al and Saroj et al showed elevation of total cholesterol is a significant finding than the reduction of HDL cholesterol in their evaluation.14,16

Of the patient population, 144 (85.7%) patients had abnormal HbA1C levels; 117 (69.6%) had HbA1C level more than 6.5% which is diagnostic of diabetes mellitus, and 27 (16.1%) patients had HbA1C levels between 5.7% and 6.4% (pre-diabetes). The exact reasons for high blood sugar values in diagnosed CKDu patients have not studied yet which need proper workups in future. However most of the diagnosed patients are from poor socio-economic background and are farmers (46.4%) and we have noted once they are diagnosed with CKDu they are prone to consume more carbohydrate rich diets which may impair the glyceamic control. Even though we expect these CKDu patients may have low BMI, in our cohort most of them (65.5%) are having normal BMI and 32.7% of patients are having BMI in the range of overweight. This may be due to their dietary habit changes following the diagnosis of CKDu.

It is well identified that cardiovascular disease (CVD) is associated with CKD and it is a major contributor for morbidity and mortality.18,19 There are several documented factors leading to atherogenesis and CVD in patients with CKD.20 Those include uremia, anemia, dyslipidemia, persistent inflammation, oxidative stress, malnutrition, hypertension, hyperphosphatemia and hypocalcemia result in vascular calcification and endothelial dysfunction.21

Dyslipidemia is a well-known complication of CKD and increases with the severity of CKD.15 One of the commonest lipid abnormalities in CKD patients is high triglyceride levels.22,23 The reason for hypertriglyceridemia in CKD patients is delayed catabolism due to reduced activity of lipoprotein lipase in uremia.24,25 Secondary hyperparathyroidism may also impair catabolism of triglyceride-rich lipoproteins.26 Suggested other mechanisms are; increased production of triglyceride-rich lipoproteins in the liver, and increased hepatic VLDL production caused by insulin resistance in CKD.24,27

Potential adverse effects of dyslipidemia and impaired glucose control on coronary vascular disease development and renal disease progression emphasize the importance of early initiation of dyslipidemia controlling therapy in patients with CKD. Clinical trials have proven that reduction of LDL leads to decreased cardiovascular mortality, but in the CKDu population, this association is less clear. 32

CONCLUSION
The study concludes that, the high prevalence of dyslipidemia, pre-diabetes and diabetes mellitus in patients with CKDu without prior history of diabetes may accelerate the progression of chronic kidney disease and increase the risk of cardiovascular disease, and pose a health problem in the society. A high degree of abnormality is found in HDL cholesterol and serum triglyceride in non-diabetic CKDu patients.

Funding: No funding sources
Conflict of interest: None declared
Ethical approval: The study was approved by the Institutional Ethics Committee National Hospital, Kandy 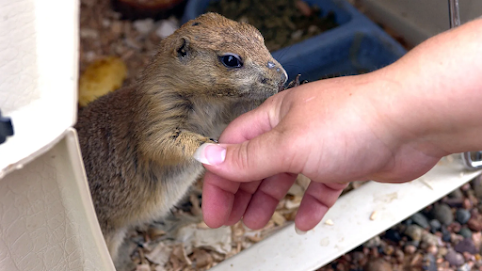 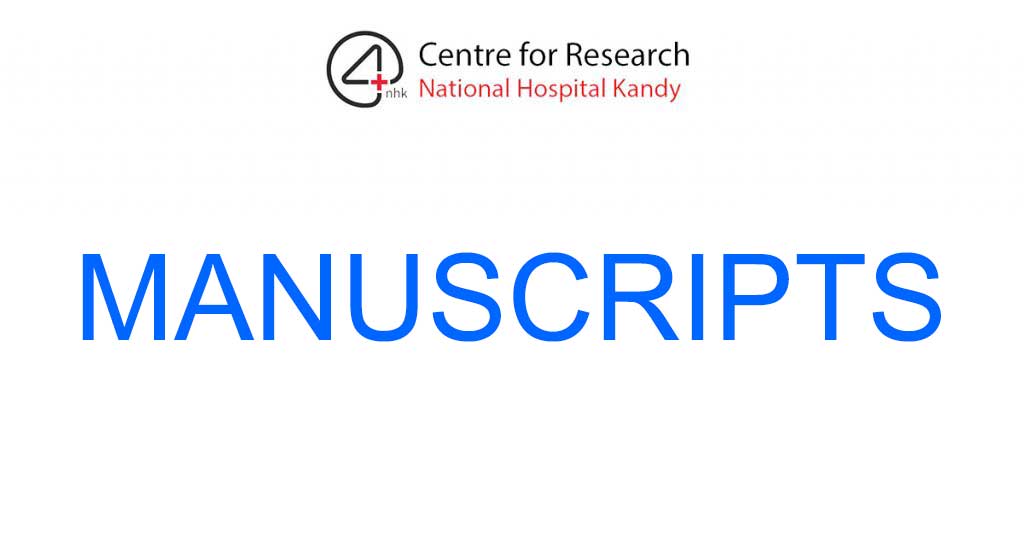